Rituals are a way which magic may be used, it is magical, special and very strange.

I will start this off by explaining about rituals and spells. Spells and rituals are used by many religions. You will encounter these on a daily basis, for example if your a christian a holy communion is a ritual. Not all rituals are thought of as good and not all bad. Spells are used in many rituals but most famously in wiccan and pagan rituals.

In a ritual the users will use what is called an altar in most rituals.

Above you can see a simple pagan, spiritualist, wiccan or occult altar. I will explain some of the stuff on this altar and what it is used for.

This is the knife on the table it will generally have many uses in rituals. The Athame represents the east which means mind, thought and choice. The object will also hold yang energy.

This object is used to create ritual circles and bring them back, sometimes used to cut energetic ties. Not usually used to cut actual things that are physical and most are blunt.

As you can see round the edge of the altar are candles. These are used in most altars and rituals. The candles are generally used to represent the god, goddess or the four elements. The colors represent different things for the ritual user. Mostly candles are used to open or close a ceremony.

This the the cup looking object. They can range in looks depending on the ritual and the altar. It represents Yin energy rather than the Athame's Yang energy, This means usually on different sides of the altar.

The Chalice is mostly used for a ceremonial drink or offerings but can also hold a salt water solution.

Between the Chalice and the candles you will see a object this is a bell. The Bell represents the Goddess's voice and will call healing energy to the user. It may also be used to clean and cleanse energy.

As you can see scattered round the altar are crystals. Each crystal will represent a different thing depending on the type of crystal. Most crystals will be used for grounding in rituals but there are also many other uses for the crystals.

The feather represents the ai and can be used to cleanse the air and smudge incense.

Generally it depends on the type of incense as to how and it what it will be used for. These can be used to Cleanse a area, call certain powers and help with meditation. You will often smell incense in temples too.

This is the 5 point star on the table and probably the most sacred of all the symbols. It will offer power and protection in magick, rituals and spells.

These depend on which deity or ritual is being used flowers are common but some and most dangerous rituals can require a blood sacrifice. 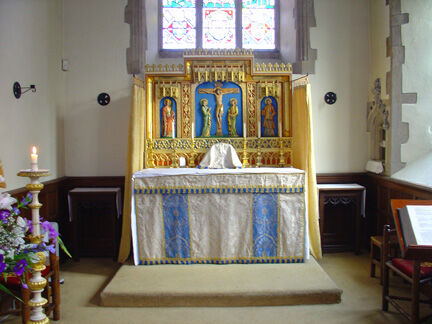 This altar looks very different and is the altar used with Christians. You will see it is decorated with expensive fabrics and very rich colors used. Generally the colors use change during the year and the festival. The candles represent the light Jesus brings. Under the cloth on the altar is a chalice much like the one in the other altar but is used to put wine in to represent the blood of Jesus which is then drank.

Behind is the cross the most used of christian symbols and used to remember that Jesus died for humans under christian belief.

The Use Of Rituals

Not many rituals will be done in public or with audience which is not in that religion or cult.

Alot of Abrihamic religions will do their rituals in a place of worship which is called a church for Christianity and the name depends for the religions. They will often hold or read from their holy book which is held sacred to them and is always well cared for.

Rituals can be used to thank or praise a god, spirit, demon, deity or goddess. The ritual will always depend on the person being thanked or praised. Offerings can come in many shapes or sizes too.

Many spells are done with the use of rituals with herbs and other stuff.

The Dangerous Side Of Rituals

This topic has been very popular for a long time and usually is bad news for many religions or cults where it can be aimed at.

Over recent years many cases of ritual abuse have come in to the local authorities, many of these cases involving satanic or occult rituals. This may be due to the rising interest in these types of rituals or just them getting reported more.

These are caused by blood sacrifice. It can also be a secondary effect.

People have been known to summon things they don't know by accident. Many things have been summoned from malevolent spirits to aggressive entities. Therefore many recommend knowing exactly what you're doing.

Over all rituals can do amazing things and if you're doing it right totally worth it.

Community content is available under CC-BY-SA unless otherwise noted.
Advertisement